An 18th century baroque palace was the setting of an international discussion on 21st century education policy among delegations from Russia, Israel, Japan, China, the United States, and Germany, Oct. 10-11.  The occasion was a celebration of the 50th anniversary of the founding of the Ludwigsburg University of Education (Germany) through a gathering of the university’s international partners.

Each participating university was asked to present educational policy issues of importance in their own country.  Joan and I made our presentation through a mock presidential debate based on the education platforms of President Barack Obama and Governor Mitt Romney.

All of the participating universities have a substantive role in teacher education in their state or nation, and though there were many differences among the institutions, our conversations circled back to very similar interests and concerns. Global competitiveness, teacher shortages in mathematics, science, and special education, and the relationship of teacher education to the broader university emerged as common themes. Concerns about rising tuition costs and rising student debt also crossed international boundaries, as did the demand for universities to become more efficient and more accountable.

The power of international partnerships in teacher education was affirmed through the universities’ shared commitment to prepare teachers with global perspectives.

The Ludwigsburg University of Education is one of UNC Charlotte’s most established international partnerships. Student and faculty exchanges between the two universities began over 30 years ago; since then more than 300 students have participated in exchange programs between the institutions.

The Ludwigsburg University is part of a major education reform initiative within the state of Baden-Wurttemberg, helping the state move toward a comprehensive school system and away from a system of separate schools for pupils with different ability levels.

The UNC Charlotte-Ludwigsburg University of Education partnership has expanded to include an annual faculty symposium designed to highlight cross-cultural education issues and to share findings from collaborative research projects.  Three groups of UNC Charlotte elementary education majors and faculty have studied at Ludwigsburg for a full semester to explore international issues and practices in teacher education.

Engagement such as this extends UNC Charlotte's global reach and burnishes our reputation for high quality, high value education on a global stage.

Posted by John@UNCClt_News at 2:38 PM No comments:

During a visit to the UNC Charlotte campus on Thursday,  Oct. 25, Gov. Beverly Perdue toured the University’s new Energy Production and Infrastructure Center (EPIC) along with two of her top advisors. During her visit, the governor met with students and faculty members and she also got a close-up look at some of EPIC’s cutting-edge sustainability features and technologies.

Chancellor Philip L. Dubois presented Perdue with a framed photo of the EPIC building and thanked the governor for her support of UNC Charlotte and leadership in efforts to grow the state’s energy cluster. Also on hand to greet Perdue were UNC Charlotte Board of Trustees Chairman Gene Johnson; Bob Johnson, dean of the William States Lee College of Engineering;  EPIC Director Johan Enslin;  and members of the EPIC Advisory Board.

EPIC is headquartered in a new $76 million building on the Charlotte Research Institute campus. EPIC also will further position Charlotte as the nation’s energy capital because of more than 240 energy-oriented organizations and more than 26,000 energy-oriented employees in its 16 counties.  It is a partnership between UNC Charlotte, state and local governments, and corporations, including several energy companies with major footprints in the Charlotte area.

Along with corporate partners, the state of North Carolina also committed millions of dollars in funding to build the EPIC building and for ongoing support for new faculty members at the center.
Considered critical to training new engineers and conducting research in energy technologies, EPIC will serve the diverse needs of existing and new energy companies, further positioning Charlotte as the nation’s energy hub. As the new home for Civil and Environmental Engineering, as well as Electrical and Computer Engineering, EPIC is a collaborative, state-of-the-art teaching and research facility. The EPIC building was designed with an eye toward sustainability, incorporating chilled-beam cooling, rainwater harvesting, drought-tolerant landscaping, sun-shading on the windows, day lighting, local building materials, and low-emitting furnishings.

Posted by John@UNCClt_News at 1:10 PM No comments:

Speaker to Present “Vision for Public Education in NC” 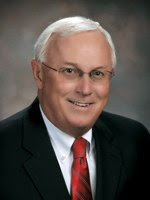 The speaker series will serve as a forum for educational stakeholders to address 21st century standards, challenges and best practices in education. Featured guest speakers will share insight and critical perspectives on education, its delivery, and impact on student performance. Policymakers, educational leaders, teachers and community members are invited to participate.


Associate professor Joanne Robinson from the Religious Studies Department in the College of Liberal Arts & Sciences is the 2012 recipient of the highest teaching honor bestowed by UNC Charlotte, the Bank of America Award for Teaching Excellence. 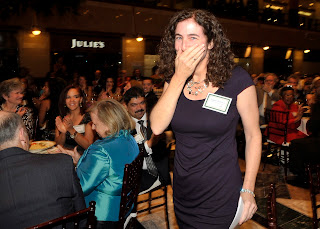 James Tabor, chair of religious studies, described Robinson’s impressive teaching accomplishments: “I think I can say without the slightest exaggeration that no faculty member I know of, in our department or outside of it, has had more of a high quality educational, inspirational and life-mentoring influence on students than Professor Joanne Robinson.”

The announcement was made at a reception on Oct. 19, at Bank of America’s Founder’s Hall.  Robinson, an associate professor, and the other finalists were honored during an evening ceremony and gala attended by UNC Charlotte faculty members and their guests.

Since joining the Department of Religious Studies faculty in 1996, Robinson has received an impressive number of teaching-related awards and grants.  She received the B.E.S.T. (Building Educational Strengths and Talents) Award for Excellence in Teaching in 2008 and became a University College Faculty Fellow in 2010-11. She also has received funding and recognition from the Wabash Center in Indiana and the National Endowment for the Humanities.

According to Robinson, the key to her success as a teacher is transparency; by ensuring that the goals and outcomes of the course are transparent, she establishes a classroom ethos of mutual respect and high expectation. She extends this engaged and collegial intellectual atmosphere beyond the classroom. Her students describe weekly informal gatherings hosted by Robinson in which interested graduate and undergraduate students stop by her office for “playtime,” where they ask questions, discuss related issues and exchange ideas.

One graduate student wrote: “Dr. Robinson brings enthusiasm and openness to active student engagement that encourages a free exchange of ideas and diversity of perspective that make the course material accessible and interesting.” By creating a stimulating environment, Robinson has been able to cultivate a practice of intellectual courage and creativity among her students, achieving her goal of instilling “analytical sophistication about complex issues, even in the absence of solutions or agreement.”
# # #

Posted by John@UNCClt_News at 8:19 AM No comments:

Multiplying math-science success for urban kids | CharlotteObserver.com
Posted by John@UNCClt_News at 9:01 AM No comments:

Posted by John@UNCClt_News at 7:22 AM No comments: