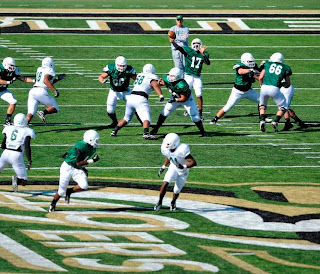 “We’re excited to get back out on the field,” said Lambert.  “We’ll continue to install our offense and defense and kicking games.  We’ll take the next step in progressing towards the fall season.  We’re looking forward to getting set for our spring game on April 20.”

The 49ers begin play in 2013 as a Football Championship Subdivision (FCS) independent and will move to the Football Bowl Subdivision’s (FBS) Conference USA in 2015. The 49ers will also become a full FBS member with bowl eligibility in 2016.

The Charlotte 49ers completed their on-campus 15,300-seat football stadium in the fall and will hold practices at both practice fields and stadium sites during the spring.

The schedule for the 2013 inaugural season is complete.

Eddie Harris is a Communicatin Studies major and an intern in the Office of Public Relations
Posted by John@UNCClt_News at 8:22 AM 2 comments: 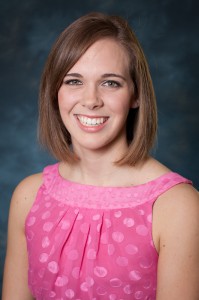 Campus Compact has named a UNC Charlotte Levine Scholar as one of 181 student leaders nationally who have demonstrated an investment in finding solutions for challenges facing communities throughout the country as 2013 Newman Civic Fellows.  Nominated by their college and university presidents, these students are making the most of their college experiences to better understand themselves, the root causes of social issues, and effective mechanisms for creating lasting change.

Christina Neitzey joined the UNC Charlotte family with energy and focus toward public service as a freshman in the Levine Scholars Program. She explores the experience of children and families in the judicial system by combining a multidisciplinary academic curriculum, internship experience at the local and national levels, and purposeful civic engagement.

Her work as a Guardian ad Litem and at the public defender’s office has provided an unfiltered look at the experience of children and families in the courts. Coupled with experience at the National Institute of Justice, she is able to see the intention and impact of public policy on those seeking justice.

As a leader on campus and a young innovator in the community, Neitzey works to promote awareness and education to protect children. Her studies in the fields of Criminal Justice, Political Science, and Psychology provide a unique perspective of the powerful intersection of research, policy development and the judicial system when it comes to serving society’s most vulnerable members. Her future study of law and continued involvement with local advocacy organizations drive her ongoing service activities.

After returning from international study in Spain, she will continue to pursue a “big picture” understanding of the needs of abused and neglected children.
Posted by John@UNCClt_News at 11:21 AM No comments:

Artist Rob Bates, a UNC Charlotte student, draws the rigors of war | CharlotteObserver.com
Posted by John@UNCClt_News at 6:55 AM No comments: