Another Year of Milestones Winds Down

With the sun setting on 2013, it’s only natural to take some time to reflect on all the great things that happened at UNC Charlotte this year.  However, with enrollment currently at more than 26,500 students – and continually growing – and approximately another 4,000 faculty and staff members, there’s no way we could adequately reference every story.  So, with that in mind, here is a snapshot of just a few things we’re proud of that made up 2013 at UNC Charlotte.

Were you ready for some football?  2013 was a milestone year in that intercollegiate football on UNC Charlotte’s campus officially kicked off, and what an exciting season we had.  Things got off to a thrilling start with the highly anticipated first game, which couldn’t have been scripted any better with linebacker Mark Hogan returning an interception 32 yards for a touchdown on only the second play from scrimmage.  That play set the tone for what continued to be an exhilarating season and provided the first of many highlight plays that are sure to come for Charlotte 49er football.  The Niners wrapped up their inaugural season with a 5-6 record.

A major step forward was taken this year in opening the doors of the campus to the greater Charlotte community.  Federal, state and local government officials, along with business and community leaders and the public took part in breaking ground on the LYNX Blue Line extension which will link UNC Charlotte’s main campus with UNC Charlotte Center City as well as businesses, organizations and cultural groups in the heart of Uptown.  The 9.3 mile extension will serve as a proverbial gateway to the University granting the Charlotte community access to a myriad of fun and engaging activities on campus – including Division I athletics, top-notch performing arts and a host of academic engagements.  Operational service is expected to begin in 2017.

Academically, one of the biggest stories was the collaboration between the William States Lee College of Engineering, Belk College of Business and the College of Arts and Architecture for the 2013 Department of Energy Solar Decathlon.  UNC Charlotte was one of 20 academic teams from around the world chosen to participate in the competition which challenged teams to design, build and operate solar-powered houses that are cost-effective, energy-efficient and visually attractive.  Our team developed UrbanEden, a net-zero energy powered home designed with a strong connection between indoor and outdoor living areas.  Our team garnered two awards during the Decathlon, third place in the juried Engineering Contest and the People’s Choice Award – the public’s vote for its favorite house.

Those are just a few of the wonderful things transpiring at North Carolina’s urban research university.  As we put to bed yet another calendar, we are already looking forward to the many things in store for 2014.  New students, novel research, stronger community bonds, all efforts we foster to underscore the commitment to remain integral to the economic, social and cultural fabric of the Charlotte region.


So from UNC Charlotte, happy holidays and we’ll see you next year!

Jared Moon is communications coordinator in the Office of Public Relations.
Posted by John@UNCClt_News at 10:24 AM No comments:

‘Tis the Season to Celebrate Our Graduates

There’s something about graduations that makes, even those of us who aren’t graduating, feel a sense of delight and excitement. So this past Saturday, when UNC Charlotte proudly conferred the degrees of nearly 3400 graduates it was a time of celebration. At this 66th commencement, held in UNC Charlotte’s Halton Arena, more than 1,900 of students received their Bachelor's while the other 1,000 graduates received advanced degrees, including 70 doctorates. 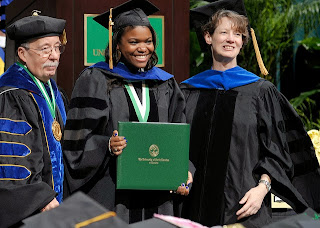 It was a special celebration for the University, as this year’s graduates are part of a growing contingency of students who have experienced the University at its peak in growth and change. Speaking to the crowd, Chancellor Phillip Dubois noted that in the last 4-6 years, not only has the student body grown to more than 26,000, the University has greatly expanded its academic programs - offering a number of new doctoral degrees – and continued improving the look and feel of the campus. With the University completing more than a billion dollar’s worth of construction during their time here, these graduates saw the construction of the Center City Building and new residence halls on main campus. And of course, there was the inauguration of football, which proved to be an exciting milestone not only for students but for many across the Charlotte community.

One of the things that makes UNC Charlotte so special is its students. Deeply rooted in its tradition, is the ability to serve those who come from many different walks of life but share the commonality of wanting to achieve academic success. Witnessing the winter commencement and many of the recent milestones, there is no doubt that Saturday was a proud day for those graduates. I’m sure that as each of them looks back, they are able to reflect not only on the University’s growth during their time here, but their own growth as individuals. Hopefully, they found their experience to be valuable and are leaving university life feeling very proud to say “I am a 49er” as they go out into the world and Stake their Claim.

So, in the spirit of being a 49er, we celebrate and applaud our graduates. As they mark the conclusion of an academic and personal milestone, we wish them much success. No matter what path they choose, an advanced academic program, the workforce or just starting the rest of their lives, we know that their futures are grounded in the 49er spirit of determination and perseverance. Cheers to the season and cheers to UNC Charlotte’s graduates.

Latricia Boone is communications director for the Colleges of Education and Health & Human Services.

Posted by John@UNCClt_News at 12:27 PM No comments:

Bah humbug? Not at commencement

I was driving in to work at the University’s commencement ceremony Saturday afternoon and, frankly, I had an attitude problem. The day was dark and cold and the rain was coming in torrents the closer I got to campus. Traffic was snarled half a mile from the front entrance, so by the time I slipped in the back way, I had to park far from the Barnhart Student Activities Center and walk a couple hundred yards in the downpour. And for what? All I was required to do was sit and watch, and attend to any reporters that might show up from the media (none did; Winter commencement isn’t a big story for them).

But then something happened; I got inside the arena, surrounded by more than 3,400 graduating 49ers, thousands of their family and friends, and hundreds of participating faculty and staff. Even before the students and professors filed in in their robes, the arena was humming with anticipation from the guests; staffers were striding around and talking on walkie-talkies, taking care of business. Photos were sliding across the Jumbotron. Finally the student orchestra filled the air with the processional and the show was on. 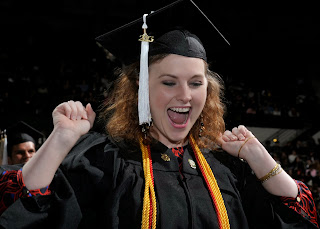 I’ve worked these gigs many times during the last eight years and try as I might to approach it as ho-hum business as usual, commencement always makes me happy and proud; proud of the graduates who have completed their hard slog to a degree, proud of the long-suffering family members, proud of the stalwart faculty, proud even of my colleagues who help keep the University operating day to day.

By the time I left the arena, I was beaming and refreshed. Thanks, Class of 2013!

John Bland is director of public relations.
Posted by John@UNCClt_News at 12:17 PM No comments: