The Council for the Advancement and Support of Education (CASE) bestowed grand champion status on two initiatives led by the offices of University Communications and Alumni Affairs in the Division of University Advancement. The projects were chosen the best from among more than 1,000 competing entries.

“Big Ideas, Big Future” is a video that welcomed the UNC system Board of Governors to Charlotte last year for its first meetings here since 1972. It was a highlight at the board's opening reception at UNC Charlotte Center City in February 2015. The video has been viewed more than 17,000 times on YouTube and has been used in many venues since the BOG meeting.

"The video, which illustrated the University’s strong ties to the city and region, was one piece of a larger package of integrated communications that reinforced the story of an institution that's truly a part of the fabric of Charlotte," said University Communications Executive Director Stephen Ward. "Brad Bowen did a great job producing the piece, and the rest of the UCOMM team really lit it up across our many channels, leading to one of the fastest-rising view counts of all of our videos.” 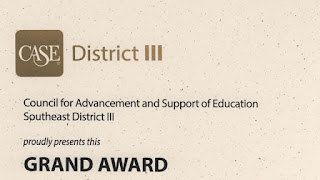 “Our goal with Niner Connection was to create a new online community that allowed our alumni to use personal accounts to accomplish a number of tasks, such as registering for events and updating their alumni information,” said Jenny Jones, executive director of alumni affairs.
“Through Niner Connection, we’ve created specific website roles assigned to different alumni groups so that only certain groups can access specific content. This has allowed us to engage in more effective direct marketing to alumni groups and to create private pages that only alumni can access. Thus far, alumni response have been extremely complimentary of the new design, and our event registrations have been easier to manage from both the user and administrative aspect.”

CASE is the largest, international association for the thousands of professionals in the fields of higher education communications, alumni relations and development. District III membership includes colleges and universities from Alabama, Florida, Georgia, Kentucky, Mississippi, North Carolina, South Carolina, Tennessee and Virginia.
Posted by John@UNCClt_News at 8:32 AM No comments:

YBM Leadership Alliance is a nonprofit organization focused on leadership development for young black men. It works to create a new reality where young black men are sought out as leaders. This is accomplished by promoting positive images regarding young black men, developing their leadership capabilities and imparting a goal for academic excellence. YBM Leadership Alliance members give back to their communities by mentoring younger students, performing local and international community service, and public speaking.

Jackson, in a video on the YBM website, noted he is among the second group of African American students to integrate higher education systems following the 1954 ruling of Brown v. Board of Education ending legal segregation in public schools.

He credits his accomplishments to knowledge and persistence.

“One of my professors told me the only thing they can’t take from you is your knowledge. That’s the first tool you need,” said Jackson.

“My mother always told me that you’re going to have to be better to be the same. I found that to be true. I’ve always worked harder than anybody else just to make sure I can make that pathway for myself,” he continued.

Jackson said it is important that he and others “pay it forward.” He urges leaders to pass their knowledge on to future generations.

In 2007, Jackson was appointed UNC Charlotte’s vice chancellor for student affairs. He also serves as an adjunct associate professor of education.

His career includes nearly 20 years of experience at research extensive universities, including 13 years as the financial aid director at the University of Massachusetts at Amherst.

In addition to his service at UNC Charlotte, Jackson is the North Carolina state director for the National Association of Student Personnel Administrators. He was awarded the Distinguished Accomplishment Award and Pillar of the Profession by this organization and is a member of Rotary Club International, the Golden Key Honor Society and Kappa Alpha Psi Fraternity.

Leanna Pough is communications coordinator in the Office of Public Relations.

Posted by John@UNCClt_News at 8:20 AM No comments: