This week, UNC Charlotte hosted its first-ever full-day conference focused on increasing cultural sensitivity as it relates to student veterans and how best to support their success as they assimilate into the college environment. The conference, Boots to Books: Understanding Military Culture and Supporting a Successful Transition, drew more than 200 individuals from the campus and greater Charlotte community.

This week’s event was another opportunity to engage the larger community and share information and resources as well as hear from student veterans on what their experience has been and how they would like to be supported. Currently, about 800 UNC Charlotte students are using some form of military benefits to pay for their education. The conference brought national and local speakers and included a panel discussion with current students who are veterans.

As part of the panel discussion, the students’ shared their unique perspectives and talked about the successes and challenges they’ve faced transitioning from military culture to college life. Hearing from the students, it became clear that not only is the University playing an integral role in their success but these students, who bring very unique experiences and skill sets, play an integral role in the University -- from student life to academic endeavors to their intellectual contribution both in and out of the classroom.

While each panelist came from different walks of life and brought different perspectives, they all emphasized how the University’s support has helped to ease their transition. The University’s Office of Student Veterans Services (VSSO) has played an important role in those efforts. The VSSO provides one-on-one consultations for student veterans and collaborates with community organizations to better serve and bring awareness of veteran challenges, both on campus and in the larger community.

Allison Jenner, assistant director for Veteran Student Services, gave an informative presentation on the role of the VSSO and how the office not only supports students, but also faculty, in terms of their knowledge and understanding of how to best communicate and engage with their veteran students. Jenner’s presentation also discussed strategies for success across the University and touched on common misconceptions, such as what it means to have post traumatic distress order (PSTD) and how to best communicate with those who do. The student panelists and speakers emphasized the fact that not all student veterans suffer from PSTD but even those who do can acclimate successfully with the right support systems in place.

In addition to speakers and the panel, attendees took part in a “support services” vendor fair and an art exhibit highlighting the work of Robert Bates, a veteran and student at the University.

Funded by a grant from the UNC Charlotte Chancellor’s Diversity Challenge Fund, Boots to Books was sponsored by the College of Health and Human Services’ Department of Social Work in partnership with the UNC Charlotte Office of Veterans Student Services, Mecklenburg County Community Support Services, and Charlotte Bridge Home.

Latricia Bone is the communications director for the Colleges of Education and Health & Human Services
Posted by John@UNCClt_News at 1:17 PM No comments: Whitman endorsed an “all of the above” approach to energy, a broad portfolio that includes nuclear power in order to remain flexible and meet future energy demand. She applauded North Carolina as a leader, ranking fifth in the United States for net electricity generated from nuclear power, with 32 percent of its portfolio being nuclear.
Despite North Carolina’s energy mix including nuclear power, Whitman cited multiple challenges in further public and political acceptance, chief among them the decades-long “hangover” from disasters such as Three Mile Island and Chernobyl, as well as the Fukushima Daiichi disaster in 2011; she said the vulnerability of the reactors at Fukushima Daiichi have been addressed for the design of new reactors. She noted that people also often confuse nuclear arms with nuclear power, and that education is the key to dispelling misconceptions and increasing its adoption. Whitman also holds public officials responsible and advocates for a national nuclear energy policy. She acknowledged that the current low cost of natural gas is also “undercutting the appetite for nuclear power.” 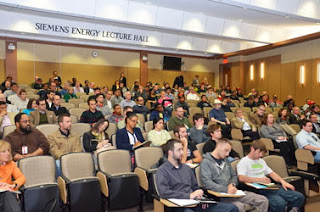 Whitman, who toured EPIC before her presentation, spoke with students about their senior design projects while making stops at the High Bay Lab, AREVA Power Systems Teaching Lab, Environmental Lab, Duke Energy Smart Grid Lab, Geo-environmental Energy Lab and the HP Energy Innovation Lab.
CASEnergy Coalition is a national grassroots organization that supports the increased use of nuclear energy. Its mission is to advance the national dialogue about energy options, focusing on the value nuclear energy provides to America’s economy and the environment. Whitman co-founded the coalition in 2006.
# # #
Bree Hankins is division communicator in the University Communications department.
Posted by John@UNCClt_News at 7:08 AM 1 comment:

Panel to discuss choices and changes in Charlotte region’s public education | CharlotteObserver.com
Posted by John@UNCClt_News at 7:05 AM No comments:

UNC Charlotte works to remain proactive against on campus threats

UNCC works to remain proactive against on campus threats
Posted by John@UNCClt_News at 6:37 AM No comments:

UNC Charlotte 49er Marching Band to step off in 2015

Posted by John@UNCClt_News at 6:29 AM No comments: