The intern returns to Google

Looking at this student’s storied history it certainly isn’t a surprise that Yi Shen is now a full-time employee with Internet giant Google at its U.S. headquarters in Mountain View, California.  Yi Shen graduated from the College of Computing and Informatics (CCI) in June, 2013, with a Ph.D. in Computer Science, with a focus area of Computer Vision and Machine Learning.  But the story begins a few years before that. 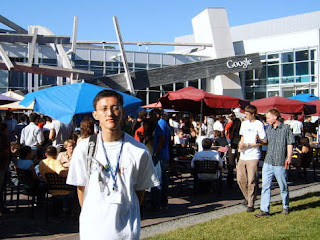 Shen, attended Fudan University in Shanghai, China.  While there he competed on a team which finished 6th in the 2005 Association for Computing Machinery (ACM) International College Programming Contest after winning the regional finals in Dhaka, China.  4,109 teams, representing 1,582 universities from 71 countries, participated in the international competition.  Sponsored by IBM, the contest fosters creativity, teamwork, and innovation in building new software programs, and enables students to test their ability to perform under pressure. It is the oldest, largest, and most prestigious programming contest in the world.  He also competed in the Google Code Jam finals in China and was ranked one of the top 40 coders in the competition.  He graduated in 2008 ranked 9th in overall GPA and first his last two years.

After graduation Jianping Fan, Ph.D., a Professor in the Department of Computer Science, and the University of North Carolina-Fudan Senior Fellow, representing both CCI and the entire UNC system, recruited Shen.  At the same time he also received a job offer from the president of Google China.  However, Shen wanted to continue his education and receive his Ph.D. degree.

“I had a decision to make,” said Shen.  “Did I want to be just an average software engineer, or continue my education and do something very innovative?  I obviously chose the latter and I’m very happy I did.”

In 2009 Shen began his Ph.D. degree at CCI.   As a Ph.D. student Shen had approximately 15 published papers.  In 2011 he was a best paper finalist at an international conference on instrumentation, measurement, circuits, and systems.

In the summer of 2012, with the help of his advisor Dr. Fan, he was able to receive an internship with Google at its national headquarters in Mountain View, California. He worked on the Search by Image technology.  At the end of the three-month internship, he applied for a full-time position and soon received an offer letter signed by Google CEO, Larry Page.

“During my internship I had the opportunity to work directly with the Search by Image corps team,” said Shen.  “As a full-time employee I continue to work with that group.  As for the internship itself it was wonderful.  It is such a great working environment, there’s not a lot of stress, everyone was very kind, and I really enjoyed the food there.”

Shen will help develop the algorithms that are the brains of the search engine.  According to Google, “The technology behind Search by Image analyzes your image to find its most distinctive points, lines, and textures and creates a mathematical model. We match that model against billions of images in our index, and page analysis helps us derive a best guess text description of your image.”

Simply put, Search by Image allows users to find out information about a specific image without having to type in keywords.  It’s as simple as a drag and drop or an upload from your personal computer.

Clark Curtis is director of communications for the College of Computing & Informatics
Posted by John@UNCClt_News at 9:02 AM No comments:

Education is for improving the lives of others and for leaving your community and world better than you found it.
Marian Wright Edelman 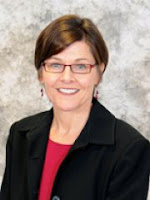 I am honored to have been selected Dean of the College of Education.  This College has a strong presence in Charlotte and its surrounding area. In fact, one of the things that attracted me to the University was its reputation as an urban research institution and its dedication to bridging connections with the greater community. So, this summer, when I had the opportunity to observe, first-hand, one of our signature programs in action, it was energizing to see just how much of an impact our students and faculty are having on the lives of members of our community.

As part of a partnership with the national Children’s Defense Fund, the annual UNC Charlotte Children’s Defense Fund Freedom Schools program attracts students from a number of area schools to our campus to take part in a multi-faceted enrichment program that focuses on enhancing reading skills, self-esteem and positive self-expression in a lively, engaging environment. I was thrilled to serve as a guest reader at the morning Harambee ceremony, where the student scholars are led in songs and chants to motivate and prepare them for each day’s activities. It was an opportunity to share my love of reading and show the students just how much fun you can have with a book. 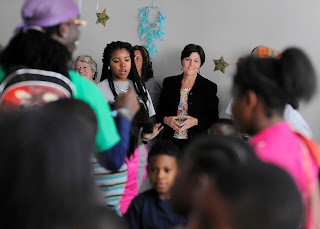 The students were polite, engaged and filled with lots of wonderful energy! I was delighted to see the commitment of the children and teachers to the program’s mission.  It reaffirmed my belief that what we do here in our classes has a huge impact on our entire community. It is because of this experience and many others I’ve had throughout my career, that I am truly committed to the College’s outreach and engagement efforts. Programs like the Freedom Schools help us weave a greater sense of community among those we serve while exposing the next generation of leaders – and future 49ers – to educational opportunities.

The Freedom Schools curriculum is also a great way to cultivate a sense of responsibility in our students as we encourage their interests in being leaders.  For me it is one of the most important ingredients for helping those of us in the College of Education become even more effective in our work, which is an investment in our community, our children and our future.

Posted by John@UNCClt_News at 8:50 AM No comments: 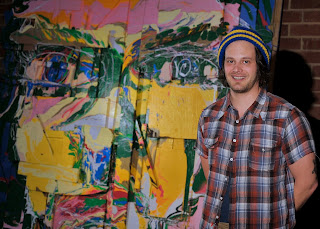 Take a drive through the Arts District along North Davidson and you might believe that the street has become the personal art gallery for UNC Charlotte undergrad Will Puckett. He is the artist responsible for the massive murals that grace Cordelia Park, the Johnston YMCA and a variety of buildings in Charlotte’s NoDa neighborhood, a historic mill area just north of downtown.

Puckett’s most prominent creation is a mural of Mecklenburg County’s fabled Declaration of Independence from Britain in 1775 that blankets the area under the Matheson Street overpass and beautifully greets visitors as they enter the Arts District from the south via North Davidson Street.

Despite his early passion for art, Puckett’s road to becoming a prolific working artist has been a long and winding one riddled with countless jobs spanning almost every region of the States, and even a few stops in Europe.

Now, his art not only pays the bills, he has racked up an impressive share of accolades.

In 2012, his work was included in the Levine Museum of the New South’s Silent Heroes exhibit for the Democratic National Convention. He has been recognized for creating the Best Public Art Project and voted Best Local Artist. He has received numerous grants from the Arts & Science Council in Charlotte-Mecklenburg and the city of Charlotte to complete his large-scale public works, and is the recipient of an ASC Regional Artist Project Grant.

His commercial and critical success notwithstanding, Puckett still longed for a formal art education. He enrolled at UNC Charlotte in the fall of 2012 and is now in his senior year as an art history major. While he doesn’t think his studies would have changed the overall design concept of his earlier paintings, he believes the additional education will help him better articulate his work.

Inspired by UNC Charlotte alum and artist Chris Watts who was recently accepted into Yale’s master of fine arts program, Puckett is staking his claim that his University coursework will help him reach the next level.

Approximately 60 percent of students who have transferred to UNC Charlotte and were enrolled last spring are working an average of 26 hours per week in order to defray the rising costs of higher education. And of the UNC Charlotte, for the 2011-2012 academic year of graduation 65 percent of the 1,837 graduating seniors bore an average of $23,686 of school loan debt.

Those are some of facts that factored into discussion of college affordability with local higher education leaders on July 3. Chancellor Dubois and presidents Ron Carter of Johnson C. Smith University, Pamela Davies of Queens University of Charlotte, and Tony Zeiss of Central Piedmont Community College, and UNC Charlotte Provost Joan Lorden, talked about challenges to and potential solutions regarding college affordability, at a roundtable discussion sponsored and moderated by Sen. Kay Hagan at UNC Charlotte Center City. Students and staff form the schools, and local TV and newspaper reporters attended.

The discussion was arranged by Hagan to get input from the education leaders and students that will inform efforts by Congress to manage the spiraling cost of higher education, including the rising cost of student loans and diminishing availability of popular Pell grants.

Some of the observations from the Dubois, Lorden and the presidents:
- Dubois said the United States has undergone a “terrific disinvestment in higher education” during recent decades, especially during the Great Recession. But he said “North Carolina has tried to sustain funding for higher education.”

- Dubois said the number of UNC Charlotte students getting Pell grants has doubled in the last five years, based on financial need. Cuts to the federal Pell grant program creates an affordability dilemma for those students that may require them to work more or drop out. And even if they manage to stay in school but work more hours, working an average of 26 hours per week is “not a good recipe for success,” Dubois said.

- JCSU’s Carter said that changes to the qualifying criteria for federal Parent Plus student loans knocked 128,000 students at historically black universities and colleges out of school. He said at JCSU, 100 student were forced to drop out and another 200 had to seek out discounts to stay in school.

- CPCC’s Zeiss said that tuition at CP has increased 70 percent since 20007 while state funding has dropped by 24 percent, taking a heavy toll on the 28,000 CP college-credit students who have financial aid.

John Bland is director of public relations.
Posted by John@UNCClt_News at 11:38 AM No comments: