Who has the most germs where you work?

From the syndicated TV show America Now, Biology Chair Martin Klontz talks about how commonly bacteria is spread in offices.

Who has the most germs where you work? - AmericaNowNews.com
Posted by John@UNCClt_News at 9:12 AM No comments: 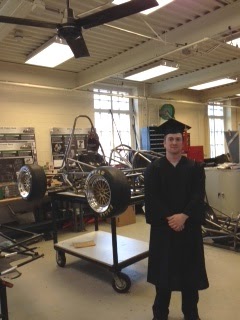 Commencement day always is a celebration and typically, it's a family day -- time to celebrate the end of a grueling sojourn for students and parents, and envision the next beginning.

One story of family at the Dec. 15 commencement included a graduate (nee student) and his uncle, a former UNC Charlotte professor. Tim Anway graduated with a bachelor's in Engineering. His uncle, Professor Emeritus Jim Dudley, came out to celebrate Tim. Dudley, a retired professor of social work, from the College of Health and Human Services attended commencement and the following graduation day reception at the William States Lee College of Engineering.

Tim couldn't resist a visit to a still in-process race car project he had worked on in the Alan D. Kulwicki Motorsports Laboratory; nor could Jim. Tim (right) and Jim (below) are pictured with the race car.

Jim has no plans to begin a second career in open-wheel auto racing. 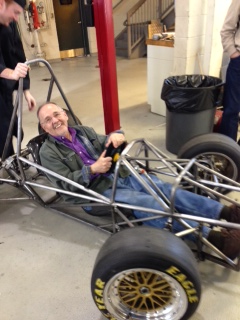 Posted by John@UNCClt_News at 12:13 PM No comments:

The UNC Charlotte Urban Institute reports  first quarter 2013 Charlotte Business Confidence Index report, released Jan. 2, shows Mecklenburg County business leaders' optimism about economic prospects in the first quarter 2013 improved compared to their expectations for the fourth quarter 2012. The overall index value of 54.2, an increase of 1.8 points compared to the fourth quarter 2012, represents improved optimism for the first time since the second quarter of 2012.

By Phillip Brown and John Bland

Recently, UNC Charlotte dedicated a bronze sculpture depicting Irwin “Ike” Belk, one of Charlotte’s most prominent leaders and a historic figure in the life of the University.

“The sculpture we are dedicating bears the image of a man who is UNC Charlotte’s greatest benefactor of sculpture and statuary and a great supporter of our academic mission. Ike Belk is perhaps the most prolific commissioner of sculpture in the whole country,” said Chancellor Philip L. Dubois.

In addition to endowing a number of academic scholarships and professorships at UNC Charlotte, Belk has provided funds to construct more than two dozen track and field facilities at institutions across the country, and he has beautified many campuses with unique works of art, said Athletics Director Judy Rose.

Currently, the UNC Charlotte campus is home to more than 25 sculptures that Belk commissioned, and there are more to come. Two new larger-than-life sculptures will soon grace the 49ers football stadium complex, one outside of each of the main stadium entrances.

During 40 years of steadfast support for UNC Charlotte, Belk has served UNC Charlotte in many capacities, including as a long-time member of the UNC Board of Governors and the UNC Charlotte Board of Trustees.

The Belk bust was sculpted by Jon Hair, the artist who also designed and built the striking sculpture “Ascend,” which graces the front plaza of the Student Union. The UNC Charlotte Athletics Foundation commissioned the creation of the Belk bust.

Phillip Brown and John Bland work in the Office of Public Relations.
Posted by John@UNCClt_News at 8:51 AM No comments:

Before the holiday break, Chancellor Philip L. Dubois spent the day in Rowan County meeting with business,    government, civic and education leaders, and celebrated at a reception with UNC Charlotte alumni. In an interview with Salisbury Post Editor Elizabeth Cook, Dubois talked about many aspects of the university's continuing growth, including updates on new research and educational facilities, managing fast growth, and misconceptions about online teaching. Read the Post's entire interview.
Posted by John@UNCClt_News at 8:16 AM No comments: