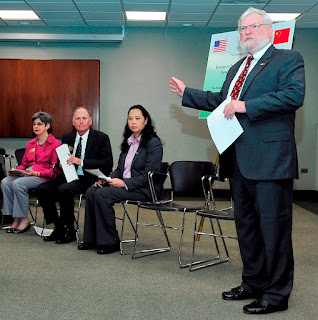 Building on Chancellor Philip L. Dubois’ visit to Beijing in 2010, a group of visitors from China arrived on campus on March 26, as part of trip to the United States coordinated by the University’s Center for China Studies.

This is the second such visit in the last year.

Organized and hosted by Paul Friday, director of the China Center and a professor of criminal justice and criminology, the event included two separate and independent groups.

A group from Xuxhou Institute of Technology (XZIT) made an initial outreach visit to discuss the opportunity for XZIT students to participate in the proposed UNC Charlotte Summer Academy in 2012. Other topics included discussion of undergraduate exchanges and XZIT graduates applying to UNC Charlotte graduate programs.

The XZIT delegation is headed by Deputy President Hao Chaojun who was accompanied by other dignitaries.

The trip by the Emergency Support New Equipment and New Equipment Training Group was organized by the International Office of the China Work Safety Administration.

The second group included the directors of different provincial work safety administrations and the managers of different coal mines and energy companies as well as a representative of the State Administration of Foreign Experts Affairs.

The group participated in a three-week training session beginning with one week at UNC Charlotte where they attended lectures and demonstrations from professors in Criminal Justice, Political Science, Public Administration, the Transportation Center, Computer Science and the University’s Department of Public Safety.

In addition, they were treated to demonstrations by representatives of private industry in the Charlotte area that manufacture related equipment as well as a visit to a one-of-a kind emergency medical hospital, Med1.

The group also attended the N.C. Mine Safety Conference, the National Mine Safety Training Academy, FEMA Training Academy and spent three days in New York City to learn emergency responses for high-rise fires and emergency response technology. The group will conclude its training with similar arrangements in the Los Angeles area.
Posted by John@UNCClt_News at 1:37 PM