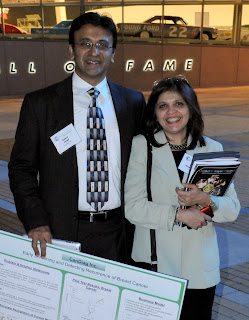 The company has developed a novel technology that accurately detects early breast cancer. Mukherjee said winning the grand prize of a $50,000 convertible-debt note from Vaterra Capital, would “pave the path for further clinical validation and regulatory approval to offer women an early detection breast cancer blood test. The anticipated impacts are greater peace of mind to women from a more accurate test and improved survival with early detection.”
Health care costs should be lowered due to the reduction of expensive testing, she added.

Eighteen finalists vied for the grand prize. Winners of each Charlotte Venture Challenge category received $10,000. They include: InfoSense Inc. from Charlotte in the new energy and high tech category; Deal Cloud, a Charlotte-based entry in the IT and informatics category; Asheville’s Mobile Potential in the consumer products and services category; and Qualiber Inc. from Chapel Hill in the life sciences and biotech category.

Instruct Health from Queens University won the student category, and Bamboo Apparel of High Point topped the social enterprise category, which was presented in partnership with Queen City Forward.

Posted by John@UNCClt_News at 1:57 PM