Why Charlotte? Because it's Engaging, Diverse, Determined

The simple question “Why Charlotte?” was the topic of a lively and compelling political discussion at UNC Charlotte Center City. 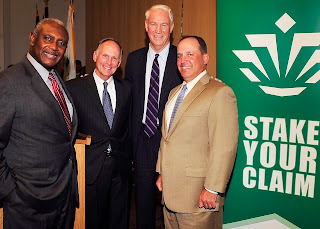 More than 200 students, faculty and top University leaders were on hand as Provost Joan Lorden moderated a panel on why North Carolina’s largest city was selected to host the upcoming Democratic National Convention.
Former Charlotte mayors Harvey Gantt and Richard Vinroot and Charlotte Chamber President Bob Morgan were the panelists for the discussion; each provided his perspective on the convention’s value to the community and UNC Charlotte. They also encouraged students to become more involved in their communities.
“There are 15,000 young people helping put on this convention,” said Vinroot, a Republican who served as mayor of Charlotte from 1991 to 1995. “Hopefully this will inspire them to engage.” 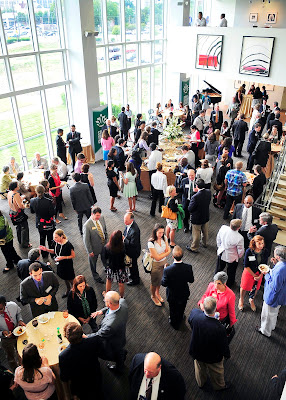 For his part, Gantt suggested one lasting legacy of the 2012 Democratic National Convention will be promoting diversity. A Democrat, Gantt served as mayor of Charlotte from 1983 to 1987.


“Charlotte created a directory of diverse businesses that wanted to do business with the DNC – much more than Denver – because we were very intentional about it,” he said.
Morgan said the DNC’s economic impact is estimated at $100 to $150 million, but the long-term impact will be much larger because the national spotlight will shine on the city for several days.
“There are 6,000 delegates coming and many of these people have never been here,” he said. “Some 15,000 media have never been here. And many corporate big shots are coming here as well as 350 representatives from foreign governments who will be here for the first time.”
Morgan said UNC Charlotte will become one of the top economic drivers in this region, much like the role Charlotte-Douglas International Airport has played in the growth of the region’s economy.
The panel discussion, part of the University’s 49er Democracy Experience, was held in partnership with the Washington Center for Internships and Academic Seminars, which provides students with transformational experiences that foster academic and professional achievement, leadership and civic engagement.
Posted by John@UNCClt_News at 7:51 AM