New audiences became aware of UNC Charlotte’s International Festival through a collaborative effort between the Office of International Programs and the Office of University Communications.
A live webcast, portions of which were viewed by roughly 825 people in the United States and more than 150 internationally, highlighted the festival activities, and a segment produced by professionals from the Office of University Communications aired on UNC-TV’s “N.C. Now” prior to the festival. The office also promoted the festival through Inside UNC Charlotte, the University’s home page and the marquee at the front entrance to campus. 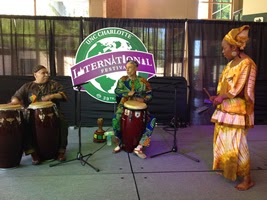 In addition, University communications broadcast and public relations staff pre-produced a number of segments involving UNC Charlotte’s international students that were aired during the five-hour live webcast of the International Festival. Faculty members from the Department of Languages and Culture Studies also provided translated verbiage for the webcast that was appropriate for audiences in target countries.
“The festival serves as a representation of the larger and broader internationalization efforts of our campus,” said Joël Gallegos, assistant provost for International Programs. “It’s really our opportunity to highlight our students coming from around the world and to highlight the various cultures that are represented not only on our campus but in the Charlotte community.”
The coordinated efforts of the University Communications Office enabled greater numbers of people in the Charlotte region and around the state to learn more about UNC Charlotte’s globalization efforts, which was a goal for the collaboration.
University Communications’ Web communications staff utilized social media to distribute festival information to a number of nations; posts received from around the world during the festival were incorporated into the webcast.
# # #
Jared Moon is the communications coordinator in the Office of Public Relations.
Posted by John@UNCClt_News at 7:58 AM