A recently published work by history professor Gregory Mixon analyzes one state’s process of freedom, citizenship and the incorporation of African Americans within the political and economic structure of the United States after the Civil War. 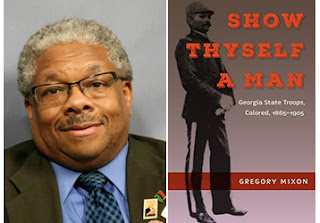 “Show Thyself a Man: Georgia State Troops, Colored, 1865-1905” explores the history of Georgia’s black militia and how both independent militias and state-sponsored militias defined freedom and citizenship for African Americans. The work is available at University Press of Florida.
“Black people had a vision for freedom after the Civil War. They had a vision of what citizenship should be and that vision conflicted with white definitions of post-Civil War freedom and citizenship,” Mixon explained.
He added that attempts to fulfill the African American vision of freedom have often met with resistance.
“There were two kinds of militia in Georgia. One was an independent militia, which was not associated with state government. Independent militias were used to organize the black community around political and economic issues such as voting and land acquisition. Tunis Campbell was one man who came south to help African Americans organize after the Civil War,” Mixon said.
Tunis Campbell, regarded as an influential African American politician in 19th century Georgia, openly spoke against laws and policies that undercut African American citizenship and economic rights.
State-sponsored militia companies served between 1872 and 1905 as an officially recognized division of state government, and both whites and blacks organized militia units at the county level to use as an instrument to dominate local governance, said Mixon
“For blacks, independent militias were a means to defend economic rights such as land ownership. State militias became more of a ceremonial group in Georgia’s cities,” he added.
State militia companies organized the celebration of Emancipation Day; the anniversary of the 13th, 14th and 15th Amendments; May Day; and Independence Day. If there was an emergency within the state, state militias could be called to restrain any threats to public safety and harmony.
According to Mixon, the resistance blacks once faced in their fight for citizenship during the 19th century is still present today. “It’s evident in the threats to the right to vote. It’s evident in police-community relations. It’s evident in the disparities of resources and the questions aimed toward the current president of the United States. It is evident in the firestorm being dumped on the quarterback for the San Francisco 49ers seeking to define the nation as a nation that sees all as equal.”
Mixon’s scholarship offers an in-depth approach to race relations, politics and U.S. urban history. Earlier this year, he received the Atkins Library Faculty Engagement Award, which honors a UNC Charlotte faculty member who has engaged in innovative or exceptional work with library collections, programs and services. The award, presented along with a $2,500 allocation for professional development, enables the library to recognize outstanding faculty contributions to its mission, vision and strategic initiatives.

Leanna Pough is communication coordinator in the Office of Public Relations.
Posted by John@UNCClt_News at 1:24 PM