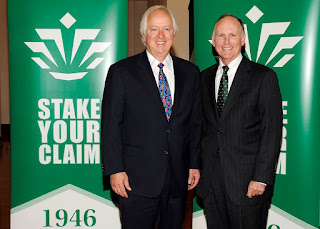 Chiquita CEO Fernando Aguirre and members of the company’s executive team visited UNC Charlotte for a tour and meeting with University officials on Feb. 16.

In November 2011, the company announced its intentions to move its world headquarters to the Queen City from Cincinnati. Chancellor Philip L. Dubois noted that Chiquita is “a socially and environmentally responsible company, one that has embraced improving world nutrition as central to its mission. That emphasis is certainly consistent with UNC Charlotte’s strengths in health and human services, and our move toward the creation of a School of Public Health here in Charlotte.”

A Fortune 1,000 company, Chiquita expects to create more than 400 jobs in Charlotte with an average wage of more than $106,000. It has leased space in the NASCAR tower adjacent to the NASCAR Hall of Fame.