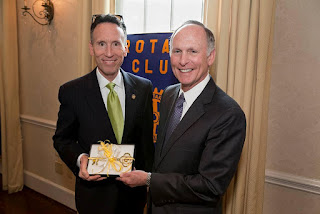 Chancellor Philip Dubois and 49er Football Coach Brad Lambert visited Shelby, N.C. located in Cleveland County, Friday, Feb. 17, to participate in UNC Charlotte’s Building Regional Support initiative. The Chancellor has begun a series of focused visits to the 12 counties that comprise the Greater Charlotte region to strengthen the university’s outreach and build relationships within the communities the University serves. Cleveland County is home to 2,200 UNC Charlotte alumni who live and work in the region and 998 of them are donors.

The Chancellor began the day meeting with the region’s largest newspaper, The Shelby Star and with representatives from Cleveland Community College. Meeting with administrators from the college, he discussed educational partnerships and strategies to enable community college students to successfully transfer to the University. Currently, 281 students from the community college are now enrolled at UNC Charlotte.

49ers Football Coach Brad Lambert joined Dubois for afternoon interviews with local Shelby media and both attended the alumni reception held at First National Bank and hosted by UNC Charlotte Alumni Affairs. More than 45 alumni attended including the family of Ashley Lutz, a UNC Charlotte nursing school graduate from Shelby who passed away in May just after receiving her degree. Ashley's family has created a scholarship in her memory. College of Health and Human Services Development Director Heather Shaughnessy and Director of the School of Nursing Dee Baldwin also attended the reception along with other notable Cleveland County alumni.

UNC Charlotte leverages it location in the state's largest city to offer community engagement initiatives and is committed to addressing the cultural, economic, educational, environmental, health and socials needs throughout the greater Charlotte region. The Building Regional Support initiative supports that mission.

Buffie Stephens is media relations manager at UNC Charlotte.
Posted by John@UNCClt_News at 11:06 AM