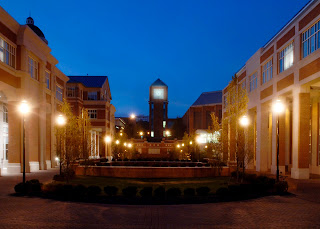 UNC Charlotte, with 25,300 students and approximately 3,000 staff and faculty is a small city; it runs 24/7 and faces the same needs as a small city in enforcing laws, protecting residents from crime, and responding to disturbances. Based on the latest statictics, UNC Charlotte the city is an increasingly safe place.

From 2010 to 2011, the crime rate on campus declined 30 percent, according to records from the Police and Public Safety Department (PPS).

Of the critical offenses tracked by the department, larceny from vehicle showed one of the most dramatic drops from 58 instances in 2010 to 26 in 2011. For 2009, the number of larceny from vehicles was 151. Building larcenies also decreased between 2010 and 2011 by 16 percent.

“We have employed multiple strategies to protect the campus and its stakeholders,” said Jeff Baker, chief of police and public safety. “With regard to vehicular larcenies, the two sky towers, funded by the chancellor, have proven to be important tools. Also, we have specific, directed patrol plans for surface and parking lots and decks during high concentration periods, and solid investigative work resulted in multiple arrests of local suspects known to break into vehicles.”

Baker also noted the department’s strategic patrols and community policing efforts, with an emphasis on student groups, such as the Student Government Association, were contributing factors in the decrease in the number of crimes.

“We are up 200 percent with our outreach programs to the campus over last year,” said Baker. “We conduct crime prevention and engraving programs across campus as well as talk about crime awareness, especially with the various student groups – such as the residence halls, fraternities, sororities and other organizations. We also work collaboratively with the University City Division of Charlotte-Mecklenburg Police Department (CMPD) and the University City business community.”

Each quarter, Baker or a member of the PPS Department meets with the CMPD University City Division to discuss strategies on how to build a stronger, crime-free community.
“My goal is that PPS officers will have a high level of involvement and interaction with all the University stakeholders, especially students, as a way to better serve and protect the campus,” stated Baker.

It is reassuring to know that while the "city" sleeps, it sleeps more safely and more securely than ever.