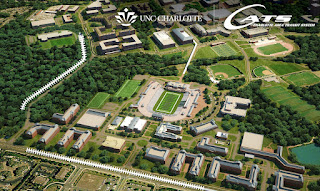 (The map shows how the CATS Blue Line Extension will move up N. Tryon St. and enter the UNC Charlotte campus near the Bioinformatics building. It will have its terminus near a hub of residence halls, the Campus Police building and the Student Union.)

The Charlotte Area Transit System (CATS), UNC Charlotte and state and local leaders will gather on campus at 1 p.m., Thursday, April 19, for a ceremony to “stake their claim” to the State Full Funding Grant Agreement for the LYNX Blue Line Light Rail Extension Project.

The agreement will provide 25 percent of the funding for the LYNX Blue Line Extension (BLE) from Center City to the UNC Charlotte campus.

“The continued support from our state leaders allows us to advance with the vision set forth for transit in the Charlotte region,” said Carolyn Flowers, CATS CEO. “I am especially excited about the perseverance and resourceful approach CATS took to make the BLE a viable and attractive project, even with the drop in sales tax revenue we experienced over the last few years.”

The support also prepares the system to receive a full funding grant agreement of 50 percent of the project costs from the Federal Transit Administration later this year.

Chancellor Philip L. Dubois stated, “The Blue Line Extension to the UNC Charlotte campus is another critical milestone in enhancing the University’s connectivity to Center City Charlotte. It will provide the community with greater access to the University’s many arts, cultural and athletic events, including 49ers football. The extension also will contribute tremendously to economic development by linking the state’s urban research University and two of the region’s largest centers of economic activity - Center City and University City.”

The 9.4-mile BLE extension would run from Uptown Charlotte to the UNC Charlotte campus and include 11 light rail stations and four parking facilities. Construction of the $1.16 billion project is scheduled to begin fall 2013 with operational service expected in 2017.