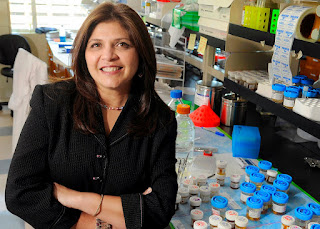 New research shows it may be no accident when doctors observe how patients suffering from both breast cancer and arthritis seem to have more aggressive cancer. However, the new-found interaction between the two diseases may also suggest a possible treatment.

A potential relationship between metastatic breast cancer and autoimmune arthritis, as suggested by past epidemiological studies, has led researchers from the University of North Carolina at Charlotte to perform a series of mouse model experiments that appear to confirm the connection.

“Epidemiological studies have implied that breast cancer survival is significantly lower in patients who also had autoimmune arthritis,” noted Pinku Mukherjee, Irwin Belk Distinguished Scholar of Cancer Research at UNC Charlotte, whose lab conducted the experiments. “As there is no obvious reason this should be so, we were interested in exploring possible cancer mechanisms that might explain why.”

The experiments point to an intimate relationship between mast cells – immune system cells that are located in various tissues and that can cause inflammation – and metastatic tumors.

In their most recent work, the researchers found that mast cells and their associated inflammation are present in larger numbers in the bones and lungs of arthritic mice than they are in non-arthritic mice. Their findings point to a relationship between the cKit receptor found on mast cells and the transmembrane stem cell factor (SCF) ligand found on metastatic breast cancer cells. The interaction between SCF and cKit appears to play a critical role in facilitating metastasis.

“We confirmed the relationship we suspected between autoimmune disease and metastastic breast cancer cells,” Mukherjee said. “This is an exciting result for us because it confirms an interesting interdependence between cancer metastasis and a specific component of the immune system.”

The study results will be presented by Lopamudra Das Roy, Research Assistant Professor at UNC Charlotte, and Mukherjee at the 2012 American Association for Cancer Research Annual Meeting in Chicago at a press conference on April 1.

The researchers worked with two strains of mice. The first group had spontaneous arthritis (SKG mice) and the second group of mice had spontaneous breast cancer (MMTV-PyV MT mice). Each of the mouse strains were artificially induced to develop the other disease and then tested for differences.

Among the findings of the analysis was that the population of mast cells within bone and lung microenvironment was significantly higher in those mice with arthritis and breast cancer versus those without arthritis and breast cancer. The differentiation of mast cells from bone marrow derived stem cells was also significantly higher in the arthritic versus the non-arthritic tumor-bearing mice.

Mast cells are the only “terminally differentiated” (mature) cells in the body that develop, like blood cells, from stem cells in the bone marrow and that also have a c-Kit receptor. Suspecting a relationship between the c-Kit receptor on the mast cells and the SCF ligand expressed by the metastatic cancer cells, the researchers tested the effect of blocking receptor by treating the mice with an anti-c-Kit receptor antibody and celecoxib, an anti-inflammatory medication.

“When the mice were treated with a therapy to target the c-Kit mast cell receptor in combination with celecoxib -- a drug used to treat autoimmune arthritis -- the incidence of breast cancer metastasis to the bone and lung was greatly reduced,” Das Roy noted.

The researchers conclude that in an arthritic condition, SCF expression in metastatic breast cancer cells induces the differentiation of mast cells from bone marrow through SCF/CKit signaling. Mast cells, in turn, facilitate the efficient metastasis of the breast cancer cells in bone and lung tissue. Autoimmune arthritis disease increases the intensity of metastatic breast cancer because bone marrow stem cells in autoimmune arthritis victims have greater potential to develop into mast cells.

In future studies, the researchers plan to examine the presence of mast cells in human tumor samples.

This research was funded by Das Roy’s postdoctoral grant from the 2008 Department of Defense Breast cancer research program.
Posted by John@UNCClt_News at 5:57 AM